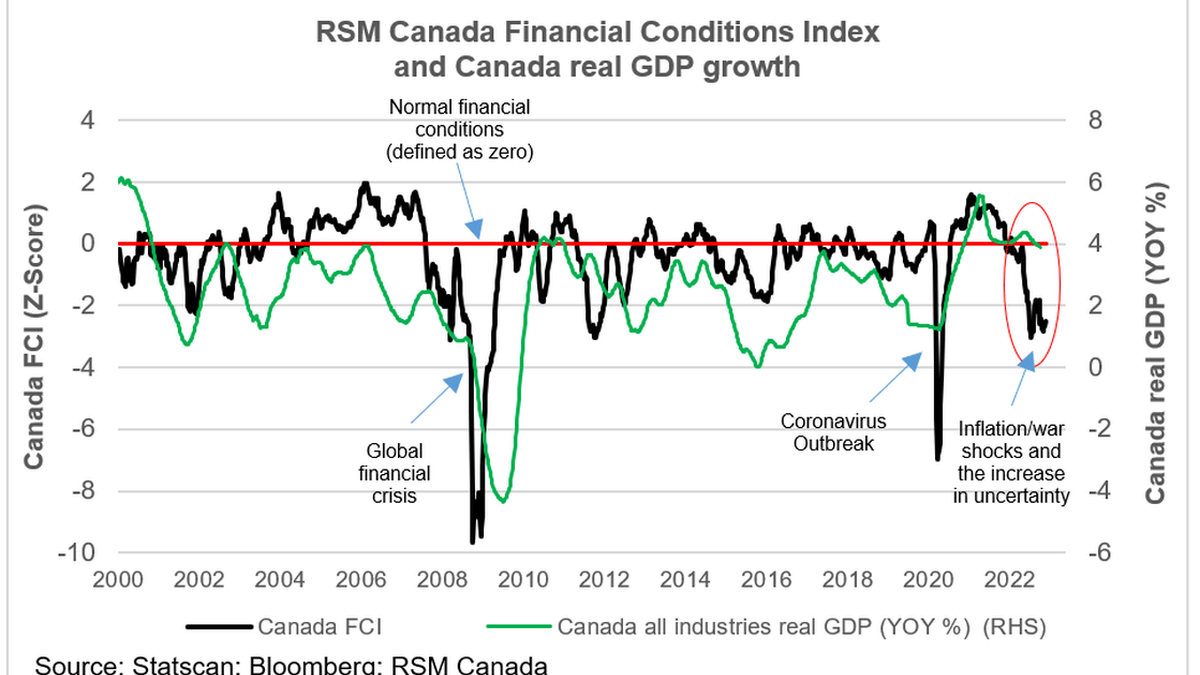 
Tightening financial conditions are hurting the Canadian economy to the point where the rising risk of a recession and a housing contraction much larger than anticipated cannot be discounted.

We expect the Bank of Canada to raise its policy rate to a peak of 4.75% early next year.

Although we expect the Bank of Canada to raise its policy rate to a peak of 4.75% early next year, after that the central bank will most likely use a lift-and-hold policy that will keep financial conditions tight.

Over the past year, the Bank of Canada has increased its policy rate from 1% to 3.75% to tame the highest inflation rate since the oil crises of the 1980s. These tightened financial conditions are expected to crimp consumer and business investment, cooling the economy.

What awaits? We offer some insights into the Canadian economy and how it operates. The Bank of Canada followed other central banks during the pandemic when it purchased long-term government securities to maintain bond market liquidity and to pressure long-term interest rates lower. It’s a strategy known as quantitative easing.

As the recovery from the pandemic took hold in 2021, the Bank of Canada began reducing its holdings of those securities. After all, there wasn’t much room for interest rates to fall. Long-term rates had already declined to 1.5% before the pandemic, only to fall below 1% in 2020.

In 2022, though, the Bank of Canada shifted gears and began reducing its holding of government bonds. Ten-year yields over this time increased upward of 180 basis points.

So while quantitative easing may not have had a significant impact on interest rates, recall the dual purpose of central bank purchases. The injection of liquidity kept the financial sector flush, prevented a bond-market freeze-up and reduced the chance of an economic collapse—no small feat during a pandemic. The bond market has sold off

More recently, the bond market in Canada has sold off, prompting the question of what was behind that selling.

We can start with the like-mindedness of the monetary authorities in the advanced economies, especially the Bank of Canada and the Federal Reserve.

Although their monetary policies were not in lock-step, the Bank of Canada and the Fed quickly pushed overnight rates from virtually zero to 3.75% and 4%, with expectations for further rate hikes if inflation remains persistent. U.S. and Canada have a connection in the bond market …

Long-term interest rates are determined by expectations of the policy rate and investor compensation for the risk of holding a security over its maturity. We should expect 10-year government bond yields to move together if the monetary policies and risk assessments of two interconnected economies are in sync. … and that extends to equities as well

It’s not just the bond market. The trend and level of equity market returns of the major Canadian and U.S. stock exchanges are synonymous, suggesting the co-dependence of corporate profitability. There is a difference, though…

If there is a difference between U.S. and Canadian financial markets, it is in the currency market. … and this affects Canada’s growth Questions? Fill in the form below

This article was written by Joseph Brusuelas and originally appeared on 2022-12-20 RSM Canada, and is available online at https://realeconomy.rsmus.com/financial-conditions-and-canadas-real-economy/.