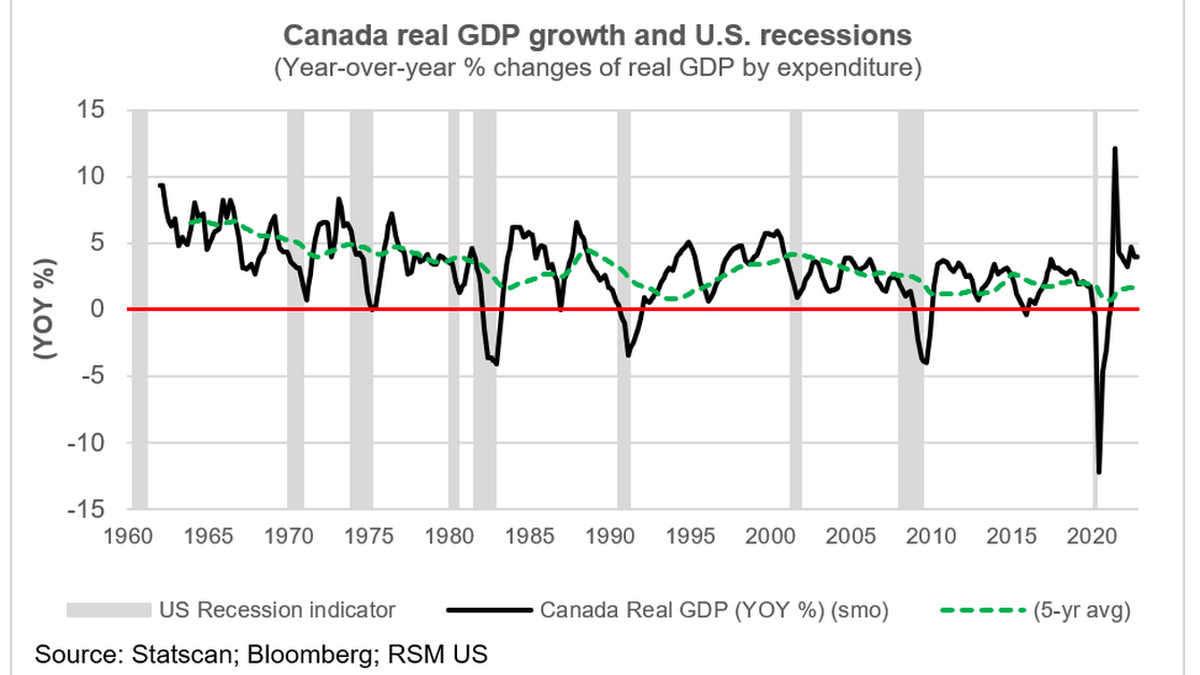 
Economies respond to financial conditions, which are determined by market expectations for monetary policy.

Expect growth to slow below 1% over the next few quarters.

With inflation still elevated and demand surging in Canada, we expect the Bank of Canada to continue raising interest rates to cool an overheating economy.

While the Canadian economy may avoid a recession next year, we expect growth will slow below 1% over the next few quarters, well short of its long-term capacity.

The economy needs to slow down to rebalance demand and supply, and to relieve price pressures. After that, growth will pick up and the economy will grow solidly.

What else awaits? We offer our outlook for the coming year.

The economy will cool…

The economy was growing at an average rate of 1.7% per year before the pandemic, only to go into freefall during the pandemic. All that changed in 2021 as the economy roared back following the shutdowns.

Now, the economy is experiencing excess demand. While the price of oil has put a floor under the decline, the combined interest rate and inflation shocks have dented housing, an important sector.

Those shocks will ultimately lead to slower growth. Canadian gross domestic product is projected to decline from about 3.25% growth this past year to just under 1% in 2023 before rising to 2% in 2024. The inflation rate surpassed 8% in June but has come down in recent months, although some sectors remain elevated.

Interest-rate sensitive parts of the economy like housing and big-ticket consumer purchases are beginning to show the impact of the increased cost of credit. But the effects of higher rates will take time to sink in. …and consumer spending will slow

Retail sales bottomed out during the pandemic, along with consumer confidence, only to surge once the lockdowns were lifted. And that growth has continued.

We expect consumer confidence to wane and for retail sales to slow as long as inflation remains elevated. Because the consumer sector is behind much of the economy’s output, we expect that to translate into lower GDP growth. The labor market is tight…

It took a year and a half for service sector employment to recover to pre-pandemic levels, and then another six months for manufacturers to fully restore their staffs.

The service-sector comprises 80% of total employment. Goods-producing occupations employ 20% of workers but have knock-on effects that support overall growth. Canada’s economy has undergone a transformation, both in terms of price stability—which is the mandate of Canada’s monetary policy—and full employment, which is achievable only within a framework of price stability.

Price stability was achieved decades ago after the Bank of Canada lowered its inflation target in a stepwise fashion and then acted to achieve that goal. Inflation finally fell below 4% in 1991 when the bank adopted its 1% to 3% target range.

Likewise, full employment appears to be redefined every 10 to 15 years. What was once a double-digit unemployment rate is now approaching a 5% equilibrium. Implicit in the Bank of Canada’s focus on price stability is achieving full employment and economic growth. The prerequisites for higher economic output are increases in capital and an increased supply of labor to operate that capital and buy the goods. …and immigration has helped

But where do the workers come from, especially in an aging nation? Canada’s population increased by 10% between 2001 and 2021, with much of that increase because of immigration. This had positive implications for the labor force in terms of size and the introduction of new ideas. In the end, Canada is a powerful draw…

People looking for a better life will choose the opportunity offered by high-income economies. Canada’s income per capita is among the highest in the world. Questions? Fill in the form below

This article was written by Joseph Brusuelas and originally appeared on 2022-12-27 RSM Canada, and is available online at https://realeconomy.rsmus.com/our-economic-outlook-for-canada-in-eight-charts/.